Abdulmohsen Aldayel has been chosen as a finalist in the British Council’s international Study UK Alumni Awards.

Abdulmohsen graduated from Brighton in 2013 after doing a Masters degree in Creative Media – now replaced by the Digital Media, Culture and Society MA – and is a finalist representing Saudi Arabia in the latest Alumni Awards, which received around 1,300 nominations globally.

Now working as Director of Communication and Director of Health Volunteering at the Saudi Ministry of Health Media Centre, Abdulmohsen has been nominated for the Social Impact Award, given to UK university alumni deemed to have made an exceptional contribution to creating positive social change.

While studying at Brighton, Abdulmohsen co-founded a media platform that brought together thousands of students across the UK, before using his media skills as a consultant for organisations across several sectors. In his current position, he played a key role in registering 100,000 local volunteers to help in the face of the COVID-19 pandemic. The positive impact of their work on millions of people in the region has been recognised by the UN. 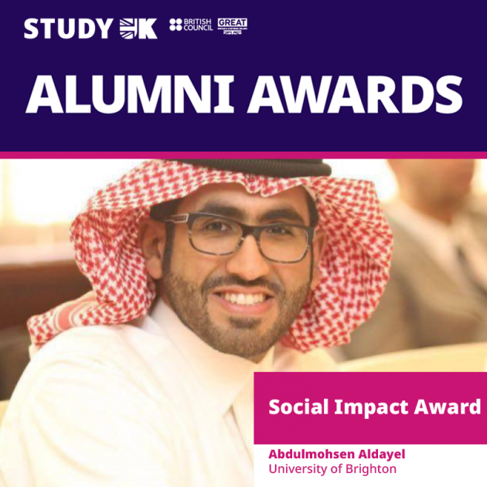 The British Council’s Alumni Awards not only celebrate outstanding individual achievements by alumni, but aim to showcase the broad impact and value of a UK higher education. Award winners and finalists are leaders in their fields who have used their experience of studying at a UK university to make a positive contribution to their communities, professions and countries.

This is the seventh outing of the Awards, with contenders coming from over 100 countries, and representing more than 140 UK higher education institutions. Winners will be announced during September/October 2021 in a programme of ceremonies taking place in 14 different countries, including Saudi Arabia, China, Pakistan, Egypt and the USA.