The University of Brighton and Eastbourne Boxing Club have joined forces to promote boxing to members of the LGBTQI+ community and to research best practice for the entire country.

Free boxing classes are being offered in Eastbourne over four weeks in May with the aim of encouraging members of the LGBTQI+ community and their friends to join regular club nights.

The event is being funded by the university’s Community University Partnership Programme and is supported by organisations including England Boxing, the university’s Springboard Grants Programme which provides awards to university Students’ Union-recognised societies and university sports clubs and teams, and ‘Love Fighting Hate Violence’, an anti-violence campaign launched by Dr Christopher R. Matthews and Dr Alex Channon, both senior lecturers at the university. 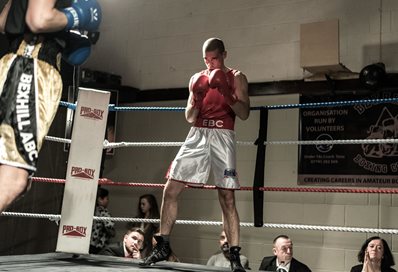 Dr Christopher Matthews who is leading the project

Dr Matthews, who researches gender theory, men’s health, drug use, violence, combat sports and inequality in the workplace, has organised the sessions and will be involved in coaching participants.

He said: “My research in boxing has used gender theory to highlight the way in which boxing spaces can be resistant to some of the social shifts that have happened in recent years in terms of issues connected to gender and sexuality.

“As a development of this work, I have wanted to do some action research which engages in tackling these issues. This project represents the first stage in a long-term process where I will produce research, guidelines and policy recommendations.

“England Boxing have been supportive of the work and I hope that once the research is concluded I will be able to work with them and other governing bodies to help spread best practice.”

The classes, an introduction to non-contact amateur boxing, will be held at Eastbourne Boxing Club in Commercial Road, Eastbourne. For more information and to reserve a place email Dr Matthews at C.Matthews2@brighton.ac.uk.