Though there is a nice photo display about Friedrich Engels’s time in Eastbourne up in The London and County pub in Eastbourne, perhaps the most notable effort made to commemorate Engels in Eastbourne came in 1976, when there was the unveiling of an Engels plaque at 4 Cavendish Place on May Day, Sunday 1 May 1976, organised with the support of Eastbourne Trades Council and the Trade Union, Labour and Co-operative Democratic History Society.  For more on the origins of this campaign please see this post.  As the Eastbourne Gazette reported, this occasion was celebrated with the local brass band – the Eastbourne Silver band –  playing at the bandstand (including a selection from ‘Hello Dolly’) then down to Cavendish Place for 3pm.  The unveiling was attended by the Mayor at the time Clifford Scott, Ernie Roberts from the Amalgamated Engineering Union (now UNITE) (and soon to become a leading left-wing Labour MP), the Cuban Ambassador Lionel Soto (1927-2008) and the German Democratic Republic (GDR) Charge d’Affaires, Heinz Birch, who described Engels as ‘one of the greatest Germans ever born’. Heinz Birch’s recollections of the day itself in his 2017 autobiography are translated and reproduced here, as is the speech given by Sheila Taylor of the Britain-GDR Friendship society. Many dignitaries and one hundred or so visitors from East Germany were there along with Cubans from the Embassy and the people of Eastbourne. They crowded around for the ceremony.  Len Caine from Eastbourne Trades Council described Engels and Engels’s friend Karl Marx as ‘the most famous leaders of the working class movement’ and noted the ‘recuperative qualities’ of Engels’s holidays in Eastbourne must have contributed to his writings. ‘May Day in Eastbourne’ by Ernie Trory, Labour Monthly, July 1976 Report in the Labour Monthly, July 1976 Report in the Labour Monthly July 1976

Amid the tremendous celebration, there was a tiny gathering from the fascist National Front who were a rising menace in this period, and had come over from Brighton and Hastings to try and intimidate those present.   Len Caine responded to their attempts to disrupt the ceremony through chanting by noting that ‘we have fought fascism in Spain, in Germany and in Italy’ and ‘we will continue to fight the fascist element in our society’.    Though the far right’s efforts failed on the day, their threats to damage the plaque were taken seriously and the plaque was taken down for the night. In fact, sadly the plaque did not remain at Cavendish Place for long due to the owner’s concerns over the ongoing threats and actual reality of criminal damage, and it was taken down and currently resides in the People’s History Museum, Manchester. There are currently plans and proposals underway to have another plaque put up in Eastbourne to mark the bicentenary of Engels’s birth  – any positive news on developments here will be shared here.  For more information  this important campaign for a plaque the fb page is here:

In 2021 a local Eastbourne radical history walk Engels and the Ragged Trousered Philanthropists was established with the support of the Eastbourne Pilgrimage Project.

Engels is rightly already commemorated with plaques in London, on Regent’s Park Road:

and in Manchester, near Oxford Road: 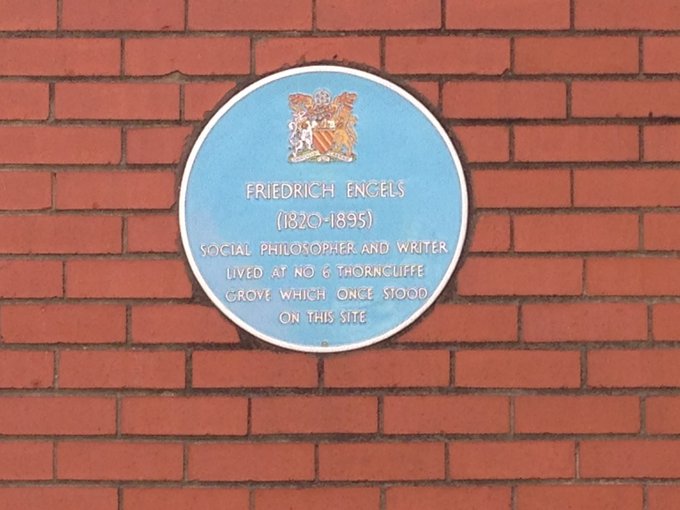 Indeed, since 2017, a statue of Engels has also been placed in Manchester: 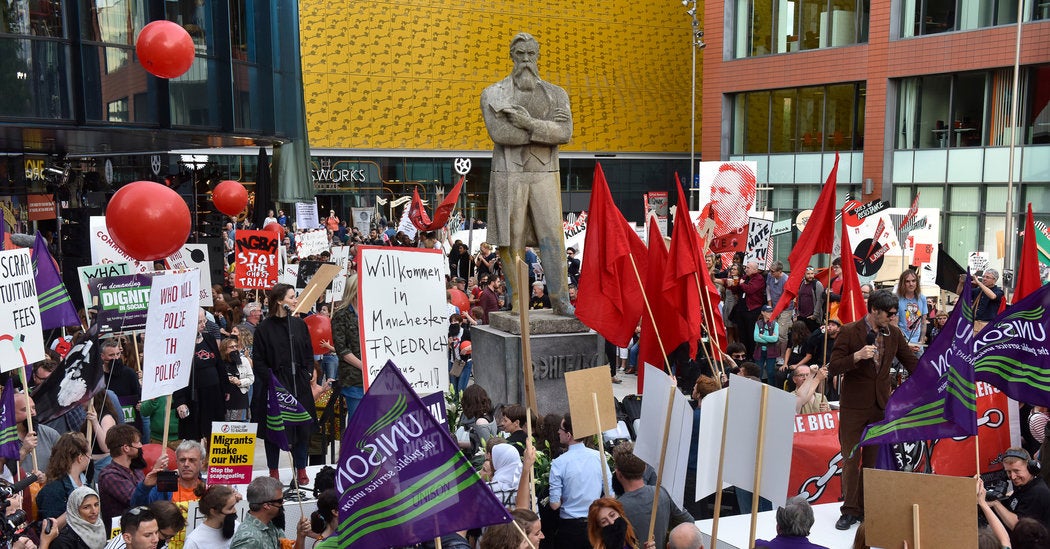 [Many thanks to Carol Mills for her help and assistance with this page, and also to Sheila Taylor]