Eastbourne has a wider and longer connection to radicalism than simply Friedrich Engels – and our page on Radical Eastbourne will begin to outline some of this rich ‘hidden history’ – this post also relates to the important work of recovering women’s history in Eastbourne. 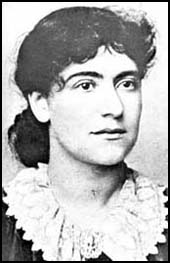 What is the connection between Eastbourne and Eleanor Marx (the youngest daughter of Karl Marx)? Answer. On August 27th 1895, on a very stormy day, four set off in a boat carrying an urn containing Friedrich Engels’ ashes. They dropped all into the sea 5 miles off Beachy Head. Eleanor Marx was one of those four.

Eastbourne was Engels’ favourite seaside town. He often stayed here in his later years and was keen to invite his friends to join him, including Karl Marx and Eleanor. They would walk with Engels along the promenade from the Pier and up onto Beachy Head.

So who was Eleanor? Apart from being Karl Marx’ daughter, we are more likely to have heard about her troubled personal life and sad end than we are to be aware of her accomplishments.

Eleanor was a determined political agitator, organizer and writer who threw herself into the struggles of her time against imperialism, racism and sexism. She was a champion of the oppressed. She had a resolute recognition of the importance of workers unity. Whilst Eleanor supported the women’s movement’s call for reforms (e.g. women’s suffrage, higher education for women et al) she was a revolutionary socialist. She contributed to a Marxist understanding of woman’s oppression; class being central to women’s liberation. She believed that working women’s struggles had more to do with working men than the middle class leaders of the woman’s rights movement.

In the pamphlet ‘The Woman Question from a Socialist Point of View’ (co-written with Edward Aveling) she critiqued capitalism as a system that placed extra burdens on women and distorted relationships and sexuality. Eleanor recognised that women and men were “comrades in struggle” and needed to organise alongside one another. She saw the worker’s rights movement as being asleep and she planned to play a part in waking it up.

During the 1880’s she actively involved herself in shaping the direction of early Socialist organisation. She lent her dedicated support to the aim of turning Socialism into a mass movement. When the Socialists were subjected to ongoing police repression she organized a free speech outdoor meeting in London’s East End. 50,000 people turned up.

Solidarity with workers struggles was central to Eleanor’s beliefs. She threw herself into the New Unionism, a movement invigorated by the Bryant and May Match Women Strike and the Great Dock Strike. Her courage and the delivery and strength of her arguments and efforts earned her the nickname (by the Beckton gas workers) of ‘Our Old Stoker’. Gas workers’ activism led to the formation of the National Union of Gas Workers and General Labourers. Eleanor worked to set up a Woman’s Union in East End’s Silvertown. She was then successful in ensuring it became a branch of the main union.

But whereas the 80’s were victorious and hopeful, the 1890’s marked a time when the worker’s spirit of the New Unionism began to wane. The bosses and the establishment came out on the offensive. A series of defeats left the unions weakened with the membership of some union being halved. Union leaders fell back into old bureaucratic, non-democratic practices.

Unionists and Socialists then turned attention to politics and parliamentary representation. By 1893, led by Kier Hardy, the Independent Labour Party was formed. Eleanor supported this development speaking at ILP events. It can be argued that the formation of the ILP came out of the defeat of the Unions at that time. Perhaps Eleanor was disheartened by this defeat. She left the Executive of the Union and entered into an isolated time in her life.

In 1898 Eleanor committed suicide by prussic acid after finding out that her partner Edward Aveling had secretly married his actress mistress. Many of Eleanor’s friends had not been at all happy when she’d first fallen ‘hopelessly in love’ with Aveling. They saw him as ‘a cad’, believing he was a bit of a fraudster who lived off her name.

In this short piece I haven’t had space to cover Eleanor’s lifelong interest and support of Internationalism. This is equally an impressive and important part of her political accomplishments.

Marx said of his daughter Jenny ‘she is like me’. He added that his daughter Eleanor ‘is me’. Hopefully, I have provided a bit of a flavour of a woman who played a substantial part in the huge shifts in society during her lifetime. Eleanor was not just the youngest daughter of Karl Marx who was betrayed by her lover and came to a sad end. She was a lifelong activist truly dedicated to the cause.