The Community Legal Assistance Services for Saskatoon Inner City Inc. (CLASSIC) initiative was founded in 2007 by three law students at the University of Saskatchewan.

It is the only community legal clinic in the Canadian province of Saskatchewan and serves over 1100 individuals a year – with a commitment to Indigenous people – through three key programmes: a walk-in advocacy clinic, legal advice clinic and special projects that address systemic issues.

The Professor Sir David Watson Award, created in memory of the former University of Brighton Vice-Chancellor, recognises the combined efforts of community and university partners towards making a difference to the shared lives of people in their shared community.

The award will be presented to representatives from the University of Saskatchewan at the NCCPE Engage conference in Bristol on 4 and 5 December.

“CLASSIC has been an integral part of the student experience, and our community, for more than a decade,” said Martin Phillipson, dean of the College of Law. “We are extremely proud of our partnership and the work that has been done, and are thrilled to be recognized with this prestigious award.”

As part of CLASSIC’s special projects to address systemic issues, law students undertake research – often in partnership with other community organisations – on topics aimed at addressing systemic barriers to justice.

David Wolff, the Director of the University of Brighton’s Community University Partnership Programme that Professor Sir David Watson established in 2003, is the convenor of the award. He said: “We had a very standard of nominations but our international Advisory Board were delighted to make this award to the CLASSIC project at the University of Saskatchewan.

“This scheme is very well established and has provided substantial benefits to disadvantaged communities whilst enriching the academic life of the university.   This kind of mutual benefit was a key principle for David Watson in successful community university partnerships and the University of Saskatchewan is to be heartily congratulated for its work.”

Sir David sadly passed away in February 2015 after a short illness. He was considered one of the foremost academic leaders of his generation and played a vital role in the university’s history.

An event was organised, hosted by our Vice-Chancellor, Professor Debra Humphris and Sir David’s widow, Lady Betty Watson, at the Watson Building, bringing together over 70 former colleagues and current staff, as well as members of Sir David’s family.

The Vice-Chancellor welcomed guests by highlighting how relevant Sir David’s views on the critical importance of civic and community engagement for universities were today, despite the Higher Education sector having changed so much. 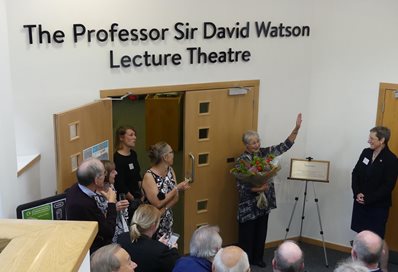 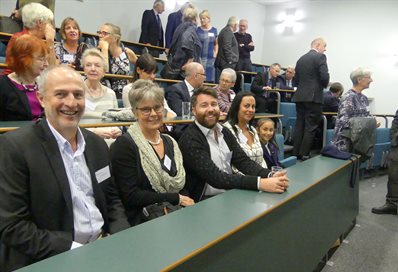 She spoke of Sir David’s contributions to the successful joint medical school and also in the creation of the award-winning Community University Partnership Programme (or CUPP) at the University of Brighton in 2003. It is his long-standing commitment and passion for community university engagement that led to the establishment of the Professor Sir David Watson Awards for Community-University Partnerships, which launched in 2016.

As part of the building dedication, we were delighted to welcome the winners of the inaugural award given in Sir David’s name – Dr Mhairi McVicar and Lynne Thomas from Cardiff University – who gave an energetic and positive presentation about their project, Community Gateway. In addition, to the Professor Sir David Watson Award, the project has also secured £1.25million in external funding.

Community Gateway works with residents and local organisations to help make Cardiff’s Grangetown district an even better place to live and work by developing world class research, teaching and volunteering opportunities which respond to residents’ ideas.

Mhairi and Lynne shared the successes alongside the challenging aspects of their project, highlighting the huge and varied impact Community Gateway has had both across the university amongst staff and students, as well as in the district of Grangetown itself, often in ways they could not have imagined!

Their experience very much brought to life the following quote from Sir David: “Civic engagement presents a challenge to universities to be of and not just in the community: not simply to engage in ‘knowledge-transfer’ but to establish a dialogue across the boundary between the university and its community, which is open-ended, fluid and experimental.”

Following the presentation, guests were invited to enjoy a celebratory drink, a light buffet, and a chance to catch up with old friends and new.

A project tailoring university research to the needs of a community is to be the first recipient of a new international award, hosted by the University of Brighton.

The award, launched this year in memory of the University of Brighton’s former Vice-Chancellor Professor Sir David Watson, recognises the combined efforts of community and university partners towards making a difference in the lives of people in their shared community.

The winning project, Cardiff University’s Community Gateway, works with residents and local organisations to help make the city’s Grangetown district an even better place to live and work by developing world class research, teaching and volunteering opportunities which respond to residents’ ideas.

The inaugural Professor Sir David Watson Award for Community-University Partnerships will be presented at The National Coordinating Centre for Public Engagement’s Engage conference in Bristol on 7 December. The NCCPE are part of the Founding Group which has established this award.

Professor Debra Humphris, University of Brighton Vice-Chancellor, said: “The quality of submissions for the award was exceptional and I congratulate all those who entered. It is heartwarming to see the growth in university-community partnerships.

“Community Gateway is a fantastic project and a worthy recipient of the award. Its aims dovetail perfectly with Sir David’s ethos of universities working with communities to improve people’s lives.”

Sir David, who died in 2015, created the University of Brighton’s award-winning Community University Partnership Programme CUPP which has supported scores of partnership projects over the past 12 years. Each year hundreds of academics, students and community partners work together to produce benefits for the community whilst enriching teaching and research. CUPP now supports other universities in the UK and across the world to develop similar initiatives in their own contexts.

Professor Colin Riordan, Cardiff University Vice-Chancellor, said: “It’s a great honour for Community Gateway to be the inaugural winner of an international award created in memory of Professor Sir David Watson, who was so dedicated to working hand-in-hand with communities for the good of all.

“Community Gateway has been driven by the passion of staff at Cardiff University who believe that good things happen when we listen to what people in our communities want from us.

“We at Cardiff University are committed to our ‘civic mission’ of promoting social cohesion and helping to improve levels of health, wealth and well-being in the communities, and work together with them to achieve their aims.”

Cardiff’s Community Gateway teamed up with community partners Grangetown Community Action and the Grange Pavilion project to build a long-term partnership with the residents of Grangetown.

Over the past three years the platform has launched 44 community-university projects, brokering connections between Cardiff University staff, students and Grangetown residents to help bring community-led ideas to life. Projects have included the award-winning Grangetown Youth Forum, a regular Grangetown Business Forum which led to the launch of Grangetown’s first World Street Market, a Run Grangetown running group, an annual mental health day, arts therapy programmes, a Citizen Scientists programme, Grangetown Safety Week, and the renovation of a vacant Bowls Pavilion including the launch of the locally-run Hideout Café with regular philosophy café sessions.

The Professor Sir David Watson award scheme, the first of its kind, attracted entries from around the UK and from countries abroad, including Pakistan and Canada.

The scheme is supported by an international group of networks and leaders in the field including the Talloires Network, a global network of community-engaged universities that Sir David helped to build and lead, and Drs Budd Hall and Rajesh Tandon, the UNESCO co-chairs for Community Based Research. Sponsors also include the University of Winchester and Engagement Australia which helps develop best practice university-community engagement in Australia.

Individual donors to the award fund selected the winning application and the University of Brighton will be re-running the award in future years. To donate to the award fund, go to: Just giving David Watson Award

For more information on the Community Gateway, go to: http://www.cardiff.ac.uk/community-gateway

On 19 October 2015 Stuart Laing, Professor Emeritus at the university, spoke on “The precious path of learning, community-university engagement: past, present and future” where the concept for this award was announced.

Professor Julian Crampton CBE, the university’s Vice-Chancellor at the time, said: “The creation of this award will send a signal that the complex work of community-university engagement is an activity that deserves support and recognition. The award will provide visibility over the years of the impact of community partners working together with academics and students to tackle issue of social justice, resilience and equity.”

“engagement presents a challenge to universities to be of and not just in the community … to establish a dialogue across the boundary between the University and its community which is open-ended, fluid and experimental” David Watson

David Wolff introduced the event at the Sallis Benney , you can view the video of his introduction here https://mediastream.brighton.ac.uk/Play/1888

Professor Stuart Laing in his talk, “The precious path of learning, community-university engagement: past, present and future”,  referred to David Watson’s extraordinary contribution to developing this work and offered some insightful thoughts about the future.  You can view the video here: https://mediastream.brighton.ac.uk/Play/1890 and the text: Stuart Laing’s talk – text

This was then followed by a panel that included Professor Angie Hart, Paul Bramwell, Elizabeth Maddison.  You can view the video here https://mediastream.brighton.ac.uk/Play/1889

Stuart Laing wrote an excellent piece for the Times Higher on the award https://www.timeshighereducation.com/blog/community-engagement-what-universities-should-be