Work from home – Songs that MAXIMISE your productivity

With so many of us currently working from home, employees will likely plug themselves into Spotify playlists to help them get through the working day.

But are your current playlists properly helping you work most productively?

To find out, the loan firm Transmit Startups recently investigated the power of music and revealed the must-have tunes to include in your working from home playlist to maximise productivity.

Songs by Queen, 50 Cent, Kanye West and Coldplay were among those artists most likely to stimulate productive activity whilst working from home.

“Music can put us in touch with what we’re feeling at a deeper level, help us connect emotionally to our thoughts and bring us to a place of greater understanding about ourselves,” Rizkallah added.

By analysing the different tasks and types of work that different industry sectors are faced with each day, Transmit Startups have created designated playlists to help with different areas of work.

Which songs will help reduce anxiety?

So, if you do find yourself getting stressed out regularly then the song ‘Weightless’ by Marconi Union has been found to reduce anxiety by a whopping 65%.

And, according to a study by Dr. David Lewis-Hodgson of Mindlab International, this tune was found to be 11% more relaxing than any other song.

Additionally, Coldplay’s ‘Strawberry Swing’ has upbeat lyrics and a higher tempo. Combining these elements was found to promote a feeling of contentment.

Research has found that happier music could be your best bet when wanting to enhance creativity.

When this theory was tested by scientists from the Netherlands and Australia, the study found that those who listened to Vivaldi’s ‘Four Seasons, Op. 8 No. 1, RV 269, “Spring”: I. Allegro’ were 23% more creative than those participants that sat in silence during the test.

If you are expected to do a professional pitch to a client during this period of remote working, you are likely to feel anxious about tech complications, poor connections and distractions from partners or young kids in the house ruining your chances.

Researchers from The Society for Personality and Social Psychology asked one group of participants to listen to a high-power music playlist (including ‘In Da Club’, 50 Cent, ‘We Will Rock You’, Queen and ‘Get Ready for This’ by 2 Unlimited) while the other group listened to ‘low-power’ music, which was identified in an earlier survey.

Both groups were shown the fragment of a word such as ‘P__ER’. The high-power groups were more likely to associate this with ‘power’, while the other group commonly related it to ‘paper’.

In a separate area of the study, participants were asked if they wanted to go first or second in a debate. The research found that those who had listened to high-power music opted to go first twice as much (34%), compared with those who listened to low-power playlists at 20%. 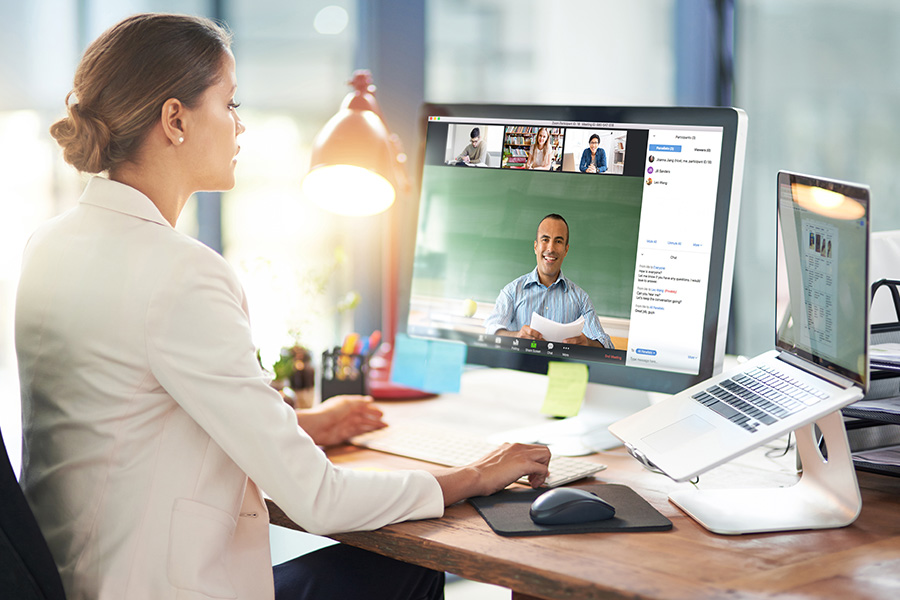 Which songs will help you crunch the numbers?

According to research published in the journal of Neuroscience and Behavioural Psychology, participants who were tasked with identifying Arabic numbers within a random selection of images and, were listening to either classical or rock music, were 0.2 seconds quicker at completing the task.

Additionally, those listening to classical or rock were 87% more likely to correctly identify the numbers than the group that wasn’t listening to any music.

Elsewhere, if you need to cancel out background noise, researchers at Rensselaer Polytechnic Institute in New York found that nature sounds, such as rainfalls and trickling water, can help you to keep focussed.

Which songs will help you proof-read more quickly?

On a Friday afternoon, getting stuck into a hefty pile of proof-reading may be a good way to finish off the working week and lift a weight off your shoulders when you start back next week.

When researchers tested the effect of dance and electronic music at work, dance music increased proof-reading speeds by 20%, compared to those who weren’t listening to any music.

Additionally, this type of music had a big impact on spell-checking abilities with a 75% pass rate. This was seven per cent higher than those who didn’t listen to any music.

Find out more about this research on https://transmitstartups.co.uk/running-a-business/could-a-playlist-help-your-business-succeed/

Why not tell us all about the hits that inspire you on our instagram https://www.instagram.com/uob_careers/

Developing resilience and how it can lead to success